A scene from the game I’m working on right now. The super tall dark thing is a monolith and unveiling it’s purpose would spoil the game 🙂 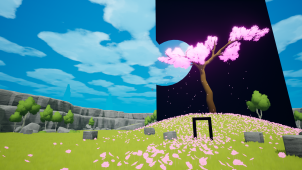 A test scene that I used to learn how to make dense foliage.

Another scene from the same game that I made quickly to test a composition centered around the big snake statue. Judging by the sentence on the upper left corner, you see how rough that first version is 😀

This a Droney, a little drone that is in charge of supervising the children of a nursery. As you can see, he was relatively ill-treated… I made it for an assignment with 3DSMax and Substance Painter. 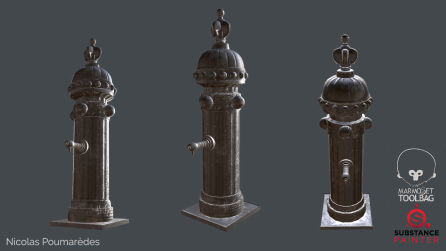 A small Water Fountain I made for an assignment. I might create a bit more stuff like that in the future.

A corridor I made in 3D for an assignment. I used 3DSMax and Painter.

I textured a 3D model for a homework assignment.

A chibi figurine that I created for a thematic week in my school. We printed it in 3D then we painted it. That was pretty fun.

A character I created for a game that was canceled. That’s only a first version of it, I never finished it.

Something I made for an assignment. That’s not really good to be honest.